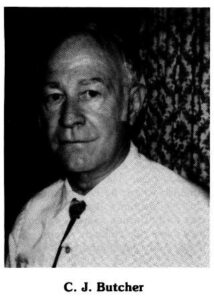 In the winter of 1965 Nance and C.J. Butcher journeyed through East Texas area on their way to Old Mexico. It was not a vacation in the true sense of the word, but an escape from the severe east Tennessee winters. The escape lasted only several months, but the memory of Texas and its beauty remained. The seed has been planted and the work necessary for a move from one state to another began. A final escape from the cold winters of Tennessee to the heat of Texas. Nacogdoches, El Campo, Victoria, etc. were checked out as potential sites, but Houston County, with its National Forest, small town atmosphere, friendly people, and sparsely settled land was chosen as the ideal location. Land owned by W.A. Spain was purchased in 1966, and arrangements were made for Reginald Driskell of Crockett to build the new home on Highway 287. A place that would be known as “Wildwood Estate”. The move as made from Tennessee in a specially designed camper, plus car. This accommodated the three dogs, and two birds in the family. Ethel and Carl Allen rented their daughter’s house in Latexo to the newcomers and Reginald began building the last of January, 1967. Several trips were made from Tennessee to Texas in order to move possessions. Nance’s red room home and acreage was then put under the watchful eye of a trusted friend, acting as caretaker. A place to be maintained as a summer retreat. Almost immediately, C.J. got involved in helping to take the county’s census. He said, “It helped him learn the terrain and the people”. He also held the first Republican primary in the history of Grapeland. Nance is a Democrat. Then he began to attend study courses in income tax with the intent of doing the family income tax. This led to doing taxes for friends, and eventually an office was added to the home. This worked well until the clientele became too large in numbers. Then the building in Grapeland, formerly owned by Bessie and Marvin Herod (Grocery and Market) on Main was purchased and redecorated. 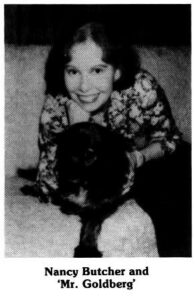 It became C.J. Butcher and Associates for bookkeeping and income tax services. Nan, always an advocate for animal rights, loved the wilderness and wildlife of Texas. The sandy land of Grapeland reminded her of southern Florida where she grew up. AlthoughTennessee was her place of birth and where summers were spent, she was to spend more time at the winter home in Miami Beach, with every spare moment allocated to the beauty found in the Everglades. At first Nan worked with the Humane Society of East Texas under the direction of the Nacogdoches group. This evolved into writing a weekly column carried by five papers, lecturing, doing TV programs on KTRE television in Lufkin and Palestine. Herb Steidle, District Ranger for the Davy Crockett National Forest,Nan and C.J. founded the Trinity Valley Audubon Society in 1971. The chapter was the 200th chapter to charter with National Audubon and covered five counties (Leon, Cherokee, Trinity, Anderson and Houston). Nan published The newsletter for 11 years and was president several times. She still operates the local “hotline” for people with problems or questions regarding wildlife. Wildwood Estate became the only Wildlife Rehabilitation Center in Houston County with Nan holding both State and Federal permits allowing for the care and release of wounded birds and animals. Numerous field trips, films and lectures have taken place at the refuge through the years, with practically every known group participating. A health food for dogs was developed because of the many inquiries made regarding animal nutrition. It goes under the name of Ms. Goldberg’s Daily Bread for the Health of your Dog and Cat, and is named after Ms.Goldberg Nance’s famous dog born on Valentine’s Day. A dog with friends all over the world, who has a “by invitation only”, party each year. This story is the tale of one family’s move to Texas almost 20 years ago, and the why, how and when. A continuing of the flow of people that came to Texas so many years ago The Owens, Julians, Bryants, Fritts, Bacons, Wilson, Brown, Jones found in the ancestral “family” line of Nan and C.J.  Butcher….The roots that bind us all together as one. Friend, relative and neighbor helping to make our community to develop and grow—the right way.