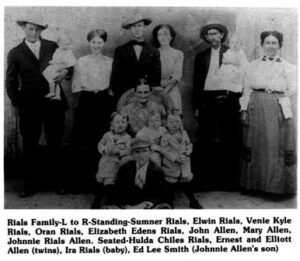 Many early settlers of Houston County can be traced in the lineage of Ira Floyd and Hannah Howard (Pete) Rials, who were married September 8, 1935, in the office of the First Methodist Church, Grapeland. Although the exact year of the arrival of many of their ancestors in Houston County is not clear, evidence indicates that some of them were in the Houston County area in the mid-1800’s, some by the early 1830’s

Born in 1858, Raeford Rials died 40 years later in 1898 in the Reynard community west of Grapeland of pneumonia. He was married to Hulda Margaret Chiles on February 10, 1881. Hulda was born in 1861 in Eutaw, Green County, Alabama, and died of typhoid fever at the home of her son, Oran Rials, in Reynard on June 21, 1922. Both are buried at Daly’s Cemetery, west of Grapeland. Hulda’s parents were Zachariah Meriwether Chiles (born February 25, 1809 in Eutaw, Alabama; died July 20, 1888) and Elizabeth Savilla Colvin Chiles (born July 7, 1836 in Eutaw, Alabama; died July 25, 1892). Both are buried at Daly’s Cemetery. Raeford and Hulda Rials were charter members of a Methodist Church founded in Reynard in the 1800’s. Children of Raeford and Hulda were Sumner Rials, Oran Rials and Johnnie Rials Allen. Oran Meriwether Rials was born to Raeford and Hulda near Reynard on September 19, 1883. He died in a Palestine hospital on April 14, 1950. He married Elizabeth Lee Edens on August 10, 1911. Oran was a farmer and cattleman in Reynard, and after moving to Grapeland in about 1924, continued to farm and raise cattle in the Reynard community until his death.Oran and Elizabeth had three children: Ira Floyd Rials (May 24, 1912 – January 30, 1980); Oran Edens Rials (presently living in Grapeland); and Iva Rials Hughes (presently living in Nebraska). Elizabeth Lee Edens Rials was born June 25, 1892, in HoustonCounty, and died September 1959 in Houston County. Both Oran and Elizabeth are buried at Grapeland City Cemetery. Elizabeth Edens Rials was descended from some of Houston County’s very early settlers. Her great-grandfather, John Edens, who was born inSouth Carolina about 1783, came to Texas and settled near the present town of Augusta in 1831. He survived the Edens-Madden Massacre in 1838, although Mrs. John Edens was killed. Several accounts of this massacre have been published. John Edens lived to be 74, and died in Augusta in 1857. He is buried in the Old Edens Cemetery near the site of the massacre. Elizabeth’s grandfather was Balls Edens, who was born in South Carolina in 1805, and came to Texas as a young man with his father, John in 1831. He and his wife, Ruth Ann Grigsby Edens had a large family: Benjamin Franklin Edens, John Randolph Edens (Elizabeth’s father), Lucinda Elizabeth Edens, Isaac Newton Edens, Elizabeth Luvinia Edens (Mrs. C.H. Beazley). Sarah Josephine Edens (Mrs. W.D. Taylor), Ruth Ann Edens (Mrs. C.B. Dailey), and Robert Balls Edens. Balk and Ruth Ann Grigsby Edens are both buried at Daly’s Cemetery.Elizabeth’s father, John Randolph Edens, was born August 11, 1847, in Houston County, and died February 10, 1922, in Reynard. He is buried at Daly’s Cemetery. Family legend says that although John Randolph was too young to serve as a soldier in the Civil War, he went along as a horse boy for two years. His wife, Elizabeth Horn, died August 10, 1905, when Elizabeth was about 13 years old.Elizabeth then went to live with the family of her aunt, Ruth Ann Edens (Mrs. C.B.) Dailey, who had several children; Charles Milton Dailey, Thomas Franklin Dailey, Iva Josephine Dailey, Henry H. Dailey, Balls Edens Dailey and Robert Smith Dailey. 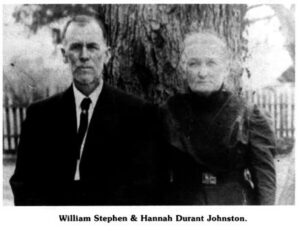 The first Howards to arrive In the area were William Young Howard and wife Sara Gates. Their son, Samuel Edgar Howard, was born near Atlanta, Georgia, in 1858, and returned there as a young man to claim as his bride Orie Walton, who was born in Georgia in 1861, a daughter of Henry Harrison Walton and Susan Bullard Clark Walton. Samuel and Orie returned to Houston County, and settled in Crockett for a number of years. During their years in Crockett, all their children were born except the youngest two, who were born after moving to Grapeland. Their children were: Nannie Howard Logan, Leila Howard Faris, Sue Howard Taylor, Samuel Edgar Howard, Jr., George Howard, Arlene Howard Appling, Earl Howard, and Bess Howard Kennedy. Two of these children, Sue (Mrs. Frank) Taylor and Bess (Mrs. John) Kennedy, still live in Grapeland. After moving to Grapeland, Samuel Edgar Howard operated a grocery store. He served as city secretary in 1899 and 1905, and as postmaster in 1913. He was a steward in theMethodist Church in 1924 when the present church building was opened for services. An interesting sidenote is that on January 16, 1902, he was granted a block of land by The New York and Texas Land Company which included lots where the present day homes of his granddaughter (Hannah Rials) and great-granddaughter (Betty Rials Bassett) are located. One family story tells how in 1910, “Papa” Howard was shot by bank robbers in the middle of the night after hearing an explosion and going downtown to investigate, only to come upon the robbery in progress at the Farmers and Merchants Bank. Samuel Edgar died in Grapeland in 1948, and Orie died in Grapeland in 1953. Both are buried in the Grapeland City Cemetery. A son, Samuel Edgar, Jr., was born to S.E. and One Howard in Houston County on June 1, 1889. He died in 1939 in Grapeland. He was married to Lillie Johnston, who was born in Grapeland on March 19, 1888, and died in Grapeland in 1952. Both are buried at Grapeland City Cemetery. They had nine children: Mary Sam Hallmark (1908-1980); Hannah Howard Rials (presently living in Grapeland); One (Snooks) Farr (presently living in Hereford); George Herman Howard (1915-1953); William Earl Howard (presently living at Houston County Lake); Steven Edgar Howard (1920-1985); Joe Howard (presently living in Kingsville); Jean Howard Hoffman (presently living in Beeville); and Leila Joyce Ritter (presently living in Hereford). All four sons served in the Navy during World War II. Samuel Edgar, Jr., was a rural mail carrier for many years. His daughters, Pete Rials and Snooks Farr, remember riding in a horse drawn mail hack with him to deliver the mail, and also when he bought one of the first flivers (topless car) in the area. Lillie worked for many years at Darsey’s in the millinery department, and later at Kennedy Brothers Dry Goods Store. Lillie Johnston Howard was the daughter of William Stephen Johnston, who was born February 22, 1846, in Greensore, Ireland, and died February 22, 1929 in Grapeland. Family history say that William leftIreland at age 14 as a stow-away on a ship. It is said that he made seven trips, working aboard ship, between Ireland and America, before settling in America. He married Hannah Durant, who was born in South Carolina. Both William Stephen and Hannah Durant Johnston are buried in Grapeland City Cemetery. Hannah was the daughter of Bethel Durant (born 1824) and Hannah Jane Durant. Bethel Durant died in 1891 and is buried at Grapeland City Cemetery. 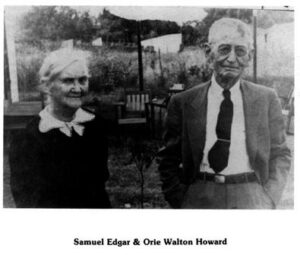 Ira and Hannah Howard (Pete) Rials spent much of their married life in service to their community and Houston County. Ira was a member of the Masonic Lodge and Pete is a member of the Eastern Star and was active for many years. Ira served as mayor of Grapeland from 1946-49, and it was during his tenure as mayor that the first streets were paved in Grapeland. He also served on the Board of Trustees of the Grapeland Independent School District, and worked diligently in making possible the construction of the present school buildings in the 1950’s. He served on the chamber of commerce which was active in Grapeland in the 1950’s, and served as its president. He was a member of the Anderson-Houston County Soil Conservation District Board of Supervisors in 1953. He was a member of the Houston County Development Foundation, and was Chairman of the Houston County Historical Society in 1969. He served on the city council and was a long-time member of the Grapeland Volunteer Fire Department and the Grapeland Lions Club. Pete and Ira were among the citizens who dreamed of a hospital for Grapeland and then worked in concert with others to see that dream become a reality in 1963. Ira served on the first Board of Directors for the hospital. He served as a director of Grapeland State Bank. Ira and Pete are lifelong members of the Methodist Church. Ira was involved in ranching in the Reynard area with his father and continued in ranching until 1970. As a young man in the 1940’s, he and Dan Pennington were in partnership in Pennington & Rials Lumber Co., located in the building where the present Co-Op is. Following his retirement from ranching, Ira and Pete, in partnership with Troy and Molly Jones, developed the Golden Acres subdivision on Houston County Lake. A man of boundless energies, Ira was perfectly complimented by his wife, Pete Howard Rials, who worked and supported him in every endeavor and activity while raising their two daughters. Ira, born May 24, 1912 in Reynard, died in Grapeland January 30, 1980, and is buried at Grapeland City Cemetery. Pete lives in the family home in Grapeland, a living reminder of the proud traditions of love and dedication brought to this area by numerous generations of the Rials and Howard families. 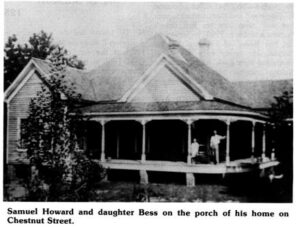 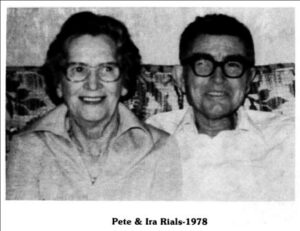