William Cobb Laseter was born in Upson County, Georgia, about 1850 to John A. Laseter (1823) and Susannah Cobb (1822). He came to Houston County in the mid 1860’s and settled in the Daly community, where he and his wife, Mary Permelia White (1862), daughter of John B. White (1820) and Harriet Celeta Keen (1828), reared a family of seven children. Their farm had previously belonged to John B. White, the place where Mary Permelia had grown up. It has been said that the romance of Mary and William was one that lasted a lifetime, a marriage that resulted after a three month’s courtship. 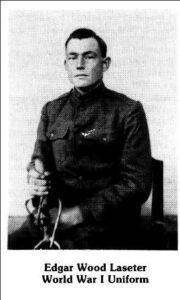 Their children included W. Arthur (1881), J.B. (1885), Annie Bell (1886), Thomas (1889), Edgar Wood (1892), Robert V. (1895), and Callie Mae (1903). Arthur remained a bachelor and lived on the family farm. The family residence burned during the 1940’s, but Arthur built a house on the place and continued living there until his death in 1949. J.B. married Vista Laseter and moved away fromHouston County. His children include Estes, Elroy, Annie B., Marie, Mary, Helen, and Mattie Bell. Annie Bell married Hugh Richards and moved to West Texas, living primarily around the Big Springs area. Their children include Ruth, Morris, Mary, Lois, and Joe. Thomas, or Tom, married Laura Lena Kent. They also moved west. 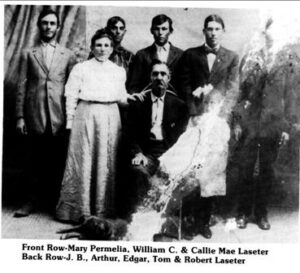 Their children include at least two daughters and a son. Tom served in Wor’16’44ar S but did not go overseas. Edgar Wood served in the army, also, Col. E., 143 Inf., 36 Div., and fought In France on the front lines. He was also later a member of the Last Man Club, an organization made up of members of his army group. After the war, Edgar married Nora Gray, who lived in southern AndersonCounty in the Antrim community. Edgar rode on horseback to court Nora. His children remember the many interesting and sometimes scary stories he used to tell about those long rides on horseback from Antrim to Daly late at night. Edgar and Nora lived for some time in Anderson County but eventually settled in Tyler, Texas, where he and Nora lived until death. They children are Loretta, Lois Fay and Lewis Ray (twins), and Jerry Lee; Robert served in the U.S. Navy during World War I. He married Lola Carson from Oklahoma, and they had one son, Donald Clayton. Robert and Lola also lived in West Texas for some time but finally settled in Grapeland where Lola, the only surviving spouse of the Laseter family, still lives. Callie Mae married W.W. (Jake) Willis; they began their married life in Grapeland where Callie Mae, the only surviving member of the Laseter family, still lives. Their children are Carolyn and Wayne. 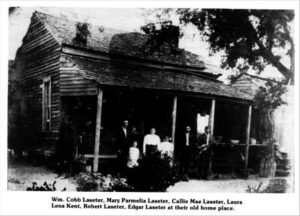 Callie Mae and Lola are both members of the First Baptist Church of Grapeland. Both have been faithful workers in both their church and community through the years. They have been and still are members of the Good Neighbors Club. The many descendants of William Cobb and Mary P. Laseter are scattered through the United States and beyond.