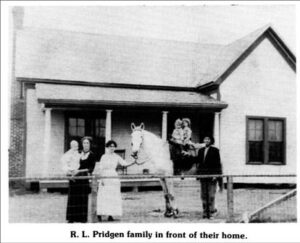 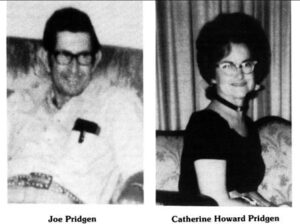 The cattle industry became big business in Houston County. Lucinda Pridgen was considered one of the best cooks and seamstresses in this area. She was a member of the Order of the Eastern Star 120 of Grapeland, a charter member of the Garden Club and an active Red Cross volunteer worker during World War II. The Pridgen Family was all members of the First Methodist Church of Grapeland. Robert Lee Pridgen died January 21, 1929. Lucinda Pridgen died November 9, 1959; and Joe Adams Pridgen died January 4, 1983. They are all buried in the Grapeland City Cemetery. Catherine (Howard) Pridgen, Joe Pridgen’s widow, lives in the old Pridgen home on South Main in Grapeland, Texas.