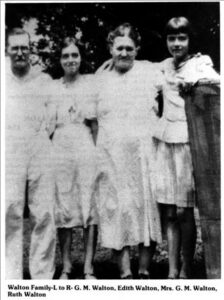 Stephen and Julia Susan Nobles Colbert came to the Daly Community near Grapeland between 1871 and 1880. Stephen, the son of Mrs. Frances H. Colbert of Monroe Co., was wounded in the foot at Richmond, Va. during the Civil War and was permanently disabled by the wound. He was a brick mason and built chimneys in the Grapeland area. Julia Susan was (apparently) the daughter of Amos Demphey Frady Nobles (m. 6 Sept. 1827) of Monroe Co., Ga. Stephen and Julia’s children, all of whom came with them, were Susan (Sue), Theodosius (Bud Dosh), Nicholas (Nick), Belle, Talulu (Tull),and Nimmie Eulalia. Sue married Lawson Edge and had Ed., Oscar, Frank, and Zelma, a daughter who died at birth. Dosh did not marry, but taught school following his father’s death until all his brothers and sisters had married. The school was in the Evergreen- Percilla area. Dosh eventually married Nanny and had Buna, Nick, and Ed. When Nick and Ed were teenagers, Dosh died, and Nanny married Mr. Jones. Their son, Franklin, was in his teens and living in Tennessee with his then-widowed mother when he was bitten by a mad dog and died with hydrophobia. Nicholas (the older) married Mrs. Carrie Meredith Shotweil, a widow with twins, Jenny and Jimmy. Together they had daughter Jessie. Nicholas was an engineer on the train which ran through Grapeland, and he lived in Palestine. Belle married `Tuse’ Lively and had Jewell, Etta, Lula, Mina, Oz, Earl, Elwood, and Ethridge. After her mother’s death, Jewell reared the children remaining at home. Tuse was an accomplished fiddle player and attended contests all his life. Oz and Jewell were also musically gifted. Tull married Jobe Johnson and had Guy and Bertha, who was born posthumously. Jobe was a well digger and was trapped in a cave-in. He could not be reached for rescue, but asked to have his violin lowered to him and played until he died. Tull married Lex Sims after Jobe’s death and they had Maud, Nimmie Belle, Deborah, Colbert, and Matt. Nimmie Eulalia Colbert (b. April 23, 1871) was born in Monroe Co., the last of the Colbert’s born in Georgia. She married Gilbert Monier (Mote) Walton (b. August 11, 1867) on April 5, 1887. G. M. (Mote) and Nimmie E. Colbert Walton had nine children. Mote farmed and later owned the Grapeland ice house. Mote died September 15, 1934 and Nimmie died on May 1, 1958. Both died in Palestine and are buried at the Davis Cemetery, as are H. H. and Susan Walton, Mote’s parents, who lived with Mote and Nimmie. Mote and Nimmie’s first son was Gilbert Arthur, born January 21, 1888. After seven years, Douglas Edmund was born on June 27, followed by Henry Stephen on September 30, 1896;Zelma on January 22, 1899; Theodore (Dosh) on August 16, 1901; Lottie Sue on April 19, 1904; Leila Fay on June 14, 1908; David Stanley on May 24, 1910; and Laura Willie on Feb. 5, 1913. Arthur married Sallie Mae Kent on April 1, 1917. Their children were Ralph Howell, Arthur Jr., Shirley, and Marjorie. Arthur was a barber and later became post master for Grapeland. Sallie Mae was a music teacher and occasionally did substitute teaching in the public school. She once won a car for a winning recipe in a contest. Ralph married Maurice Long and worked for a car dealership in Crockett, but later returned to Grapeland as postmaster. Ralph and Maurice’s children are Elizabeth Zoe; Ralph, Jr., who is a district judge, Morris Gilbert who is an attorney, and Paul who is an accountant. Arthur Jr., married Gwendolyn Skidmore and operated the Grapeland Chevrolet dealership and also served as fire chief. Arthur and Gwen’s children are Sandra and David. Shirley married William Wayne Willis who was killed in WW II. Shirley has a son, Bill. Marjorie died on her sixteenth birthday while undergoing an appendectomy. Henry married Elva Cook on January 10, 1934 and worked on the railroad in Palestine. Henry and Elva’s sons were Jack Gilbert, who died at birth, and David Joe, who was circulation manager for the Palestine newspaper until his retirement. Doug married Luna Mae Bridges on 31 August 1914. Doug had attendedBusiness College in Tyler for a time but left it and returned to Grapeland to work as a bookkeeper. After a few years of marriage he began farming in Percilla. Doug and Luna Mae had 9 children: Edith Eulalia, born in Georgia in 1915 married Porter Jones and raised her children (Sam, Mary Ann, Jim Edd, and Troy Wayne) while Porter worked as a correctional officer; Ruth Holland Walton was born near Grapeland in 1918 and married James W. Logan; Douglas Edmond was born in 1920 and married Genita Holcomb; Harold Eugene was born in 1923 and was killed in action in 1942 in the South Pacific; Zelma Virginia, born in 1925 died in October, 1927 in an accident; William Henry (Bill), born in 1927 married Martha Messer and earned his doctorate from the University of Texas; Janie Joann, born in 1930, married Paul E. Larkin; David Winters was born in 1932 and married June Hutchens; Dorothy May, born in 1935, married Larry J. Larkin. Zelma Walton married Wright Sullivan, and following their divorce, reared their son, Charles Aubrey, inPalestine where she worked as a buyer for retail stores until her death in 1958. Theodore (Dosh) married Delma Powell and worked for the railroad in Palestine most of his life. Their children are James, Janice Marie, Forrest Powell (Pubby), and Jack. Lottie Sue married Carl Whitaker (See Ike Whitaker family). Leila married Buck Crutcher, and their children are Laura Sue and Joe. David Stanley married Clara Bowie. Willie Laura married A. E. Claybourn and their son is Stephen Ellis.