Edward Hill Darsey and his family, with the exception of his two oldest daughters, came by train from Sunnyside, Ga. in 1902 toGrapeland, Texas. The family lived on a farm east of Grapeland for several years before moving to town. During this time, a farm south of Grapeland on the Old Crockett Road had been bought and timber was cut to build a home in Grapeland like the one the family had left in Georgia. This house on Maple Street with very few changes, is now the home of Mr. and Mrs. Curtis Turner. His farm lands south of town are still owned by some of his grandchildren and great grandchildren. On his farm beside the usual crops, E.H. Darsey had a syrup mill on the Little Elkhart Creek and fruit orchards. One of the products for which he became well know was his “Darsey Melon” – a large, dark-green, round melon. In his later years, he was also known as a horse-trader. It wasn’t unusual for him to ride his horse into town on Saturday and come home riding a new one with one or more following. Edward H. Darsey served as a confederate soldier in the Civil War, and in 1938, at the age of ninety-two, he attended

The 75th anniversary of the Battle of Gettysburg at Gettysburg, Pa. At this time, he was the last remaining Civil War veteran inHouston County. His wit, humor, and tall tales were a delight to friends, and especially his grandchildren. He was affectionately called “Uncle Ed” by many friends. Edward Hill Darsey, son of John Speer and Nancy Darsey, was born in Sunnyside, Ga., November 17, 1847 and married Caroline Griffin. To this union, one child was born, Clara. After the death of his first wife, he married

Mattie Clower. The following children were born: William Gray, Frances, Joe Thomas, Mary Loye, John Speer, Esther Emma, George Reason, Melvin Herbert, and Lee. Clara m. Nim Barfield; c. Kenneth (M. Mary Jones, c. Bill and Kenneth Jr.) William Gray m. Carrie Tallulah Stewart; c. Dorothy, William Gray, Jr., Edward Stewart, Joe Thomas, Carolyn, and Mary Frances. Later generations are listed in this book under the William Gray Darsey family history. Frances m. J. Harold Nutt; c. Mattie Glynn, Frances, William Fears, Edward Hill, Anna Loye, Emily, James Harold, Jr., and Mary Esther. Mary m. Lloyd Childes; c. William Harold (m. Cathy LeBert Leslie; c. Shannon and Tiffney) and John Melvin (m. Rayne Contoi; c. Bethan Christina and Daniel Lloyd.) Joe Thomas m. Mary Etta Keen Davis; no children. Joe Thomas was employed at Geo E. Darsey & Co. and his wife was a milliner for a number of years prior to their move to Alpine, Texas where Mr. Darsey operated a wholesale grocery business. Loye Darsey taught school for several years before she became a saleslady in the dry goods department at Darsey’s store where she worked until her retirement. In her home she boarded school teachers where at times it was not unusual for eight to ten single lady teachers to stay. As an active member of the Grapeland Methodist Church, she especially enjoyed her work with the children in the Beginner’s Dept. She started the first volunteer nursery during church services. Esther Darsey, a school teacher for over fifty years, began her teaching career in theDailey School. From there she taught at Hayes Spring, Latexo, Grapeland and Houston. Lee Darsey, who was crippled from early childhood, was confined to a wheelchair from which he sold pencils, peanuts, popcorn, etc. on Main Street. He was a victim of the influenza epidemic during World War I. John Speer Darsey m. Ora Gainey; c. Mary Ann and Mattie Lee. Mary Ann m. Hubert Smith; c. Randall Darsey (m. Erlinda Daclan), Julie Ann (m. Thomas E. Shelton; c. Charles Alexander and Cullen Darsey) and Gretchen Leigh Mattie Lee m. John Warren Smith; c. James Gregory and Robert Dolan. John Speer, after serving in France during World War I as a Corporal in the Motor Corp., was employed by Darsey’s store. Here he filled several positions from driving a cotton truck to clerking, to manager of the hardware department. During this time be bought part of his father’s farm south of Grapeland which is now owned by his daughters. In later years he turned the farm into improved pasture land. Speer and Ora were members of the Grapeland Methodist Church where Ora was a Sunday School teacher and active worker in the W.S.C.S. George Reason m. Agnes Murray; c. George Murray (m. Betty Whitbread; c.. Fred R. m. Carol; c. David Murray and Grace Ann) and Joseph Edward m. Sue Bowen; c. Joanna. After attending Texas A&M University, George began a career in banking which lasted 46 years. He began work at the Farmers and Merchants Bank in Grapeland and upon his retirement he was vice-president of the Texas Commerce Bank, Houston, Texas. George and Agnes were charter members of the Bellaire UnitedMethodist Church and he was also a charter member of the Bellaire Masonic Lodge. Melvin H. Darsey m. Imogene Gillespie Baker. When his father’s health prevented him from working on his farm, Melvin returned to Grapeland to take over the management of the family farm. At one time he operated a nursery on the farm specializing in the growing of roses. His interest turned to the growing of fruit – peaches and plums, and was one of the first growers of the Bruce plum in this area. He owned and operated a packing shed for shipment of peaches and plums. 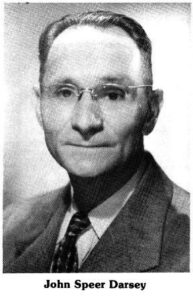 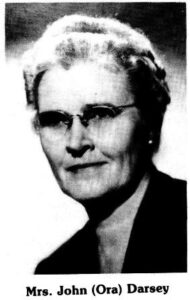