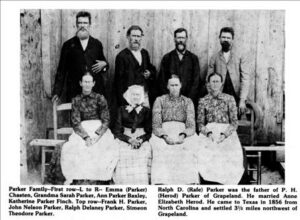 The family of Ralph Delaney Parker, Sr. came to the Oak Grove Community, then known as Woodland Hall, from Lumberton, North Carolina, in about the year 1858. He had five sons and two daughters. Their names were Frank H., John Nelson, Ralph Delaney, Jr., Simeon Theodore, and William, who was killed when a tree fell on him while he was splitting rails on the Parker estate in the Oak Grove community. He was among the first to be buried in the Parker Cemetery, a five acre tract of land donated for a cemetery by Ralph Delaney Parker, Sr. the two daughters names were Ann (Baxley), her husband was killed in the war between the state, and Emma (Chasten). Frank Parker, eldest son of Ralph Delaney Parker, had come to Texas two years before the family moved fromNorth Carolina to the Oak Grove community. He wrote a letter to the folks back home, telling them how well he liked this part ofTexas and that he wanted them to move here. They came to the Mississippi River in 2 covered wagons. When they had come toVicksburg, their teams were tuckered out. 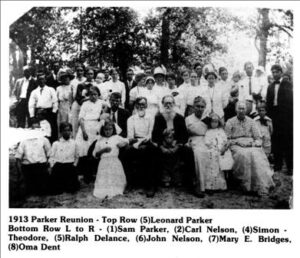