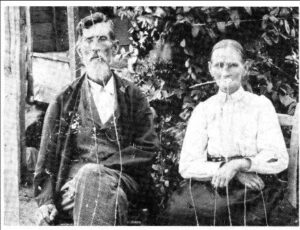 According to the tombstone in the McCarty Cemetery, Irah Goolsby was born (in Texas) on February 14, 1842. The circumstances surrounding his childhood and early manhood are legendary–all that is known positively is that he lived with the Indians. One of his grandsons remembered that he told of beating the drum while the Indians danced. The family supposes that his parents were killed in an Indian raid and that he was taken captive. Whether he escaped or on reaching manhood chose to return to a white settlement is unknown, but by the early 1860’s, he had married Eliza Wall (b. November 17, 1843), whose family had come from Mississippi and was living in a one-room frame house in Chapel Hill, farming community which had a church and a one-room school house. His first child, Hugh, was born while he was away fighting in the Civil War. He was wounded so severally that he literally dragged himself home, and while still crippled, added to his house. He prospered as his family grew. Hugh was born in 1862, married Sally Dixon of Georgia and died in 1918. The exact dates of the births and deaths of the other children is not known; but Ran married Donnie Allen, Addle married Dolly McCarty and Sadie married Jess Allen. Irah was a cotton farmer and took his cotton to Houston in a wagon drawn by six oxen. Cotton was not sold; it was traded for staples and whiskey. Whiskey was not only a household necessity but could always be traded for anything needed before the next trip to Houston. A round-trip took about a month. During this time Eliza ran the farm and cared for the family. He also owned a shingle mill and a saw mill. Both oxen and horses were used to haul logs to the mills and to operate the mills although the Goolsby’s themselves supplied the muscular manpower needs. They hewed logs to build houses and split shingles for the roofs. However their life must not have been too difficult. !rah lived to be seventy-five; Eliza, eighty-four. In 1886, the oldest son, Hugh, married Sally Dixon (b. 1865-d. 1944) and they, too, settled in Chapel Hill. During the next twenty-five years, the marriage was blessed with eleven children: Minnie (b. 1887, married John 0. Grounds); Luther (b. 1889, married Georgia Marshall); Jessie (b. 1890, first married Oscar McQueen, then Sam Graham, died 1960); Lonnie, (b. 1892, married Lillie Marshall); Ellie, (b. 1894, married Dan McQueen, d. 1971); Lawrence (b. 1896, married Corine Turner); Lizzie (b. 1899, first married Earl Allen, then Louie Hoster, and last Will Graham, d. 1966); Leo (b. 1902, married Dillard Lewis, d. 1970); Gail (b. 1904, married Ruby Turner); Linnie J. (b. 1907, married Maudie Cummings); Delvie (b. 1910, married Grady Walling, d. 1944). When Irah Goolsby died in 1917, Hugh Goolsby and his sons bought an 80-acre farm near the Ephesus Community which also had a one-roomed schoolhouse and Baptist Church. They moved the mills and continued sawmilling as well as farming. They raised cotton, corn and their own food which was canned and dried. corn was taken to a local grist mill. They killed and cured their own meat. There was always plenty to do. The children recall the good old days of hog-killing, logrolling, fox hunting, ice-cream suppers, candy pulling, church going and square dances where Pa played the fiddle and most of the boys called. They remember Pa with his mule whip and Ma’s thump on the head. They also remember hearing about the first train that came through. They were too far away to see it, but the noise and smoke made them think a cyclone was coming. Later when a peddler told them what it was, lrah hitched up and the whole family, and went to take a firsthand look. The boys thought it looked like a wild horse, smoking and snorting. In the Goolsby tradition, the children of Hugh and Sally have all lived close to the land–although some of them drifted to town. The girls: Minnie, Jessie, Ellie, Lizzie and Delvie all married farmers. Minnie lived in Houston County. The boys have followed several lines of occupation. Luther was a farmer and horse trader. Lon was a farmer. Lawrence is a retired farmer, a saw miller, and the best square dance caller in Houston County. Gail was a farmer and cafe operator. Linnie J. worked in the oilfield, as a farmer, and filling station operator. Leo was one of those who, although he always had ‘a piece of land,’ went to town where he operated cafes for eighteen years. But always, too, he did a little horse-trading and owned dogs–ten to thirty foxhounds. He and his wife Dillard often went hunting. They would sit around a big campfire, make coffee, eat a snack brought from home, or bake potatoes in the ashes. Sometimes as many as ten or fifteen friends and relatives would come to the woods to listen to the dogs run, and sometimes other hunters would bring their dogs. Sitting at the campfire, Leo, chewing his tobacco and spitting in the fire, would say, ‘I don’t have a dog that will run a rabbit,’ or ‘I bet a $100.00 Little Nell is after a fox,’ or wouldn’t take $50.00 for old Rags.’ And later, ‘I hear old Blaze right over yonder. Listen, I hear them running right over at Smith’s garden.’ Leo used a fox horn to call in his dogs when the race was over the next day. The Goolsby’s still own the old place in Ephesus Community where there is still a Baptist Church which some of them attend. On the second Sunday in July of each year, there is a homecoming near the old place. If all those in Houston county, kin to the Goolsby’s attended at one time, it would be a mighty big gathering.