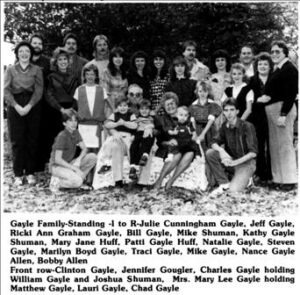 The Charles Afton Gayle family moved to Grapeland from Dayton, Ohio in March of 1964 upon Colonel Gayle’s retirement from the United States Air Force after 26 years of active duty; his last station was Wright-Patterson Air Force Base, Ohio. They had purchased the A.U. Streetman land on the Old Crockett Road while stationed in Austin at Bergstrom A.F. Base. After three years living in Montana, Alaska and Washington, they were transferred back to Texas, to 12th A.F. Headquarters in Waco. Col. Gayle would fly over to this area and views his land from the air whenever possible and noticed some vacant land near his, adjoining it between the railroad track and Highway 19. After investigating it through his lawyer, J.B. Sallas, the owners were traced and the acreage was purchased, they decided to build on it when he retired. After arriving in Grapeland, the family found only one vacant house to rent while they were building their new house – the Pauline Dailey house across from the Charley Darsey home; it has since been demolished. A clearing had to be made before building could begin and the highway sounds seemed a long way off. R.J Haffner Construction of Crockett built the house and John Frye drilled the deep water well. Moving-in day was on Mary Lee’s birthday, July 25, 1964. After years of hard work, clearing, burning and planting, the place developed into their retirement house. All of their seven children are settled around Texas, with the exception of their oldest daughter, Nance and her family who live inYuma, Arizona. She has one son, Mark who is married to Tammy and also lives in Yuma. Only one child, Patti Huff, lives in Grapeland at this time; she has a daughter, Mary Jane, 15. Their other children are: Mike, a Texas A&M graduate who teaches Ag in Deweyville, and is married to Marilyn. They have two daughters, Traci, 12, and Lauri, 9. Steven, also an ex-Aggie, is an insurance salesman in Waco and is the father of three children, Chad, 17, Natalie, 13, and Clint, 12. Kathy’s husband is Mike Shuman. She has two children, Jennifer, 10, and Josh, 3, and worked for General Telephone in Baytown. Bill, (known in this area as Billy Bob) is married to Ricki Ann and has a 3 ½ year old son, William Jr. He works for Graham Construction Co in Waco. Jeff, who was only three when he moved to Grapeland, also works in aco for Lockeridge-Priest Air Conditioning and Venting Co. He is married to Julie, a granddaughter of Mrs. Marvin Willis of Grapeland, and they have an infant son, Matthew O’Connor. He lives in Chilton and commutes to Waco to work. The Gayle’s have eleven grandchildren – so far – who love to come visit them “out in the country” whenever possible.