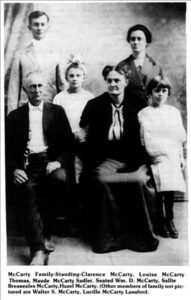 In 1903 Dr. and Mrs. W.D. Mc- Carty moved to Grapeland and bought the Dr. Merriwether house that stood then on the corner of Oak and Chestnut streets. They added a second story to this house which the doctor with his family occupied until his death on January 29, 1925, The McCarty’s had six living children: Lucille, Walter, Maude, Clarence, Louise and Hazelle. On March 28, 1890, Miss Sallie Breazeale, later Mrs. W.D, McCarty, was one of the attendants at the marriage of W.R. Wherry to Miss Ada Bruton at theMethodist Church in Porter Springs. In 1895 Miss Sallie was one of seven maids of honor in the court of Miss Gracie Smith, sponsor for Crockett Camp #141 of the sons and daughters of Confederate veterans. Later in Grapeland, Miss Sallie, as she was called, was a charter member of the Order of the Eastern Star No. 120; the Woodman Circle; and the First Baptist Church of Grapeland. She was also a very good cook. During the summer revivals, she prepared peas, cornbread, onions, ham, fried chicken, cake, and homemade ice-cream for both the Methodist and Baptist visiting ministers and the ministers of all the local churches. The doctor considered opossum, the way Sallie prepared it, a delicacy. Of course, he fed the opossum a while before he judged it suitable for the table. Then Miss Sallie swathed it in red pepper and flanked it with sweet potatoes, many of which had been “taken in on accounts.” Uncle Billie Brown frequently treated the McCarty’s with gunny sacks of large sun-kissed Elberta peaches – sweet and juicy. At this time a well-stocked smoke house was almost a necessity. Behind the big two storied red house, the McCarty smokehouse always had hams, backbones, ribs, linked and pan sausages. 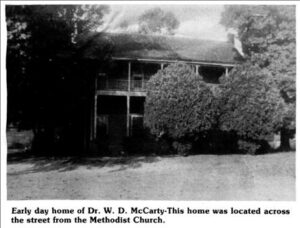 At breakfast, Miss Sallie cooked one pan of sausage for her and the girls and one for the doctor and Clarence. Owens would label these “mild” and “very hot.” In Porter Springs, before he moved to Grapeland, Dr. McCarty was elected as one of the agents for the Houston County Commission to the World’s Fair. He was a delegate to the Houston County Democratic Convention. He served as one of the managers of the school elections in the Porter Springs District of Houston County. He was interested in the progress of public schools, advocating adding mathematics courses to the curriculum. Dr. McCarty received his degree from Tulane Universityin New Orleans, La. He enjoyed telling a tale about his orals. When asked to name the 256 structures of one of the systems of the body, he practiced a bit of psychology on the examiner. He rattled the ones he did know in Walter Winchell fashion. When he stopped to get his breath, the examiner said “stop! If you know that many that well, I am satisfied that you know them all.” He didn’t! Dr. McCarty owned the first telephone company in Grapeland which he later sold to Mr. J.S. Cook in Crockett. He was an official physician for the I.G.N. Railroad Company. He was a 32nd degree Mason, a Shriner, a Steward in the Methodist Church, where he sang tenor in the choir. He was one of the original Myrtle Lake stockholders, a lake located about a mile and 1/2 east of Grapeland. Anytime he was fishing and was needed in his office, two long blasts and one short one from the whistle at Bridges gin located where Bailey Foster Funeral Home is now, would bring him home from he lake. Many times before school either Louise or Hazelle went with him to the lake to row the boat while he caught for the family dinner. As time passed a custom became a tradition. On August 8 each year the doctor reserved the lake for his friends, patients and relatives. Before daylight the men went to the lake to run the trot lines. At noon the fish were fried right at the edge of the lake. Shortly after daylight, the children went to the lake to swim. The ladies went later after they had baked pies and cakes and fried many chickens. Some arrived in wagons with cantaloupes, watermelons, tomatoes, and plums. The last order of the day was gallons of homemade ice-cream. At one time Dr. McCarty owned a fine – rather wide – team of horses. He made house calls even in the rural areas. Sometimes he filled the buggy bed with gum and hard candy and took Louise and Hazelle with him. (How nice of them to get them our of Miss Sallie’s hair for awhile!) They often waded in a creek while he made calls near by. The horses and buggy in time were replaced by a model T Ford, the first one in Grapeland. The doctor’s office was on the south corner of the block in the yard of his home. There “Papa” Sam Goodson, Mr., Sam Bredges, Mr. Dick Murchison, the Reverend A.O. Riall and others joined the doctor for daily domino games. He was a great checker player also. Many nights his brother Mike came up from Crockett on the 7:30 P.M. train and the two played checkers until the train went south at 1 A, M. But they could not discuss politics, as they disagreed on that subject. Even in these early days of practicing medicine, Dr. McCarty kept his opiates under lock and key. After some drugs were stolen from his office, he hid the next supply in various places in his home. At his death, Miss Sallie had to go to court to dispose of them. The doctor was somewhat of an entertainer and a joker. He enjoyed playing his fiddle, but never in contest with Mr. Barker Tunstall of Crockett. Once when Miss Sallie had ladies – Mrs. Bob Pridgen, Mrs. Al Brown, Mrs. George Darsey, Mrs. Starley Boykin, and others over for a quilting bee, he came into the room ostensibly to admire their handiwork; but all of a sudden he surprised the ladies with a black cat – right in the middle of the quilt! With no air conditioning, the family often sat – after dinner – on the office porch with a pitcher of ice water and listened to tales the doctor could tell by the hour. Now on rare occasions, he performed very minor surgery. Some of these operations prompted one of his many doctor tales. Some, true – others, the family wondered. Like the time he removed a knot full of sand from the bottom of a youngster’s foot. The little boy, chopping cotton barefooted, had chopped into the ball of his foot. When he came out from under the anesthetic, he looked up and asked “Did it hurt?” When she thought it was time to go to bed, Miss Sallie knew just how to put and end to these tall tales. She would simply say, “Now you have told that one so many times you will soon believe it yourself!” That was all that was necessary. Mrs. McCarty died on August 25, 1959. The McCarty’s loved their church, their family, and the city of Grapeland.