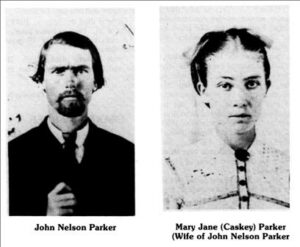 John Nelson Parker was born on February 15, 1844 near Lumberton, N.C. to Ralph R. and his wife Sarah C. Hodges Parker. He came to Texas with them in the late 1850s. He homesteaded land in the community of New Prospect. Later he served in the Confederate Army. After his return home, he married Mary Jane Caskey of Houston County. John Nelson was one of the early merchants in Grapeland. He was operating a general merchandise store with his son-in-law, James M. Owens at the time of his death, July 28, 1914. He and Mary Jane had six children to live and have families of their own. They are Letha, Robert Alonzo, Mary Viola (Tennsie), Samuel Regan Sr., Edward C. and James Nelson. Mary Jane died February 15, 1895 from childbirth. They are buried in the ParkerCemetery. Robert Alonzo Parker was born May 7, 1875. He married Addie Jo Keen, the daughter of James Terrell and Elizabeth Overstreet Keen, also of Houston County. He was known as Bob Parker. He made a living for his family on the farm and carpentering some as he had time. 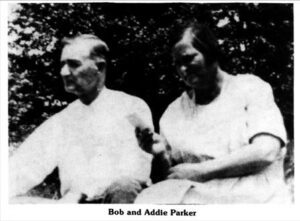 Bob was an ardent worker in the Methodist Church where he taught Sunday school for many years. Addie was a large lady and loved her children and grandchildren. The boys enjoyed hunting and they have said that she would help them dress the game and then cook it for them and help them eat it at any hour of the day or night. 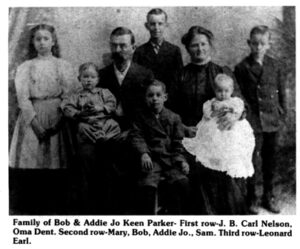 She died on March 5, 1934 and Bob died August 8, 1943. Both are buried in the Parker Cemetery. Their children were Leonard Earl, twins, Mary and Samuel (Sam) H., Carl Nelson, J.B. and Oma Dent. Leonard Earl Parker, the eldest child of R.A. and Adie Jo Keen Parker, was born on December 20, 1896. He married Lillie Mae Brown, the daughter of Henry Moses and Polly Ann Brassell Brown on April 8, 1916. Leonard and Lillie lived in New Prospect several years and their two sons, Clyde Nelson and Leonard Ceburn, worked at a glass factory, but he longed for the farm life he knew, so they moved back to Grapeland and after a few months, they moved across the Trinity River in Madison County where he continued to farm. He was one of the first to use a tractor in that part of the country. Their daughter Reba Mae was born October 1, 1933 while they lived near Midway. They lived six years in Leon Countyand then purchased a farm in the Elwood Community in Madison County where they lived out their lives. They were leaders of theMethodist Church each place they lived. Leonard died June 15, 1970 and Lillie on January 31, 1975. They are buried in the ParkerCemetery. Mary and Sam were the twins born February 24, 1899. Mary married Enoch Whitaker. Their children are Freddie, Flois, Melvin and Robert Delton. Mary later married Frankie Roberson. They lived on a small farm near Montalba. She died May 28, 1986. Sam (Buddy) married Lola Cochrum, the daughter of Henry and Bobbie Cochrum on July 31, 1926, in the Methodist Church in Mexia,Texas. Their children are Joyce Erlene and Gerald W. Buddy died January 8, 1952 and is buried in the Parker Cemetery. Carl Nelson was born September 27, 1902. It is said that he was a natural horse trainer.

He and his younger brother, J.B. had an accident in a wagon when they were young boys which left J.B. with permanent injuries. Carl Nelson died with pneumonia December 15, 1918. J. B. was born May 22, 1907. He lived all of his life on the Parker farm in New Prospect except the time he served in the U.S. Army during World War II. He died February 12, 1985 and is also buried in the Parker Cemetery. Oma Dent was born May 21, 1909. She married Tom E. Hunter of Groesbeck, Texas. Their children were Waydell, Collene and Durwood. After Tom’s death, Oma Dent married John McDaniel. They live in Groesbeck. Addle Mertie was born March 31, 1911. She weighed over 16 pounds when she was born, with black curly hair down to her shoulders. Folks came from far and near to see her. She died on July 15, 1912 with diphtheria. R.A. Jr. was born on June 9, 1915. He married Freda Lee Payne, the daughter of Fred and Eulalia Bridges. They had one son, Joe Don. R.A. Jr. (Parker, as he was called) died April 28, 1980. Freda, Joe Don and his family still live on the Parker Farm in New Prospect.