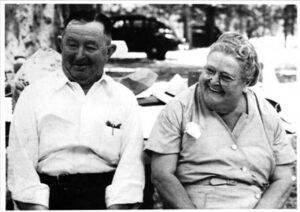 The J.W. Howards, Maude and Jimmy (James) White, and their two young daughters, Lucille and Rosalie, moved from Crockett to Grapeland in 1911. Jimmy originally came to Texas from Georgia in 1878 when he was a baby. Maude was born in Crockett in 1888. In Crockett, they ran the old Pickwick Hotel (the Crockett Hotel which recently burned down) but they decided to move to Grapeland, and they eventually moved into the old W.W. Lively home which is over 100 years old and where one of their daughters Hazel Jones, resides today. The W.W. Livelys were grandparents of Maude Berry Howard. Grandfather Will Lively and Grandmother Sarah Catherine came to Texas when he was 15 and she was 5 years old in the year 1850. The Howards had nine children – seven girls and two boys. The brothers had quite a time keeping up with all those sisters! Their children who are living are Lucille Rester of Colorado Springs, Colorado; Rosalie Brandstetter of Rosenberg, Texas; Hazel Jones of Grapeland; Ruthie Floyd of Honolulu, Hawaii; Catherine Pridgen of Grapeland; Helen Copeland of Clarksville, Texas; and Clifford Howard of Victoria, Texas. Deceased are J.W. (Bill) Howard and Dorothy Ann Looker. There were 18 grandchildren and 14 great grandchildren. The grandchildren of the J.W. Howards are Sandra (Rester) Sweeney, Aurora, Colorado; Barbara (Jones) Behrens, Temple, Texas; Ann (Brandstetter), Weiss Houston, Texas; Dee Floyd, Honolulu, Hawaii; Linda (Pridgen) Duggan, Dickinson, Texas; James Robert (Bob) Pridgen, Las Cruces, New Mexico; Jon Copeland of Ohio; Tom Copeland of Clarksville, Texas; Gregory Copeland of Arkansas; Sheila Howard of Austin, Texas; Jeanne (Howard) Greenwood, Evergreen, Colorado; Bill Howard, Houston, Texas; Dawn (Looker) Tanner, Oklahoma City Oklahoma; Kathy (Looker) Boyd, Livingston, Texas; and Bob and Ben Howard, Victoria, Texas. Deceased: Jimmy Floyd and Pam Rester. The great grandchildren are: Greg, Hugh, Jr. and Sheila Sweeney of Auroa, Colorado; Becky and Jon Allen Behrens of Temple, Texas; Cristin and Catherine Dickerson of Houston, Texas; Dacia and Douglas Duggan of Dickinson, Texas; Patti and Clete Tanner of Oklahoma City, Oklahoma; David Jack and Michael Copeland of Arkansas. Jimmy Howard had the first picture show in Grapeland. It was located where Custom Cleaners is today. Of course they were silent movies, but Maude pepped up the show with her piano playing at suitable moments. Later the movie house was converted into a skating rink where we kids did have lots of fun! The Howards were among the first to have electric lights. Jim Howard was also a produce and feed dealer and at one time was the Sinclair agent for this area. Maude, although very busy with their large family, was very active in the First MethodistChurch and was teacher of the ladies class, called the Dorcas Class, for 13 years. She was also a member of The Grapeland Garden Club. 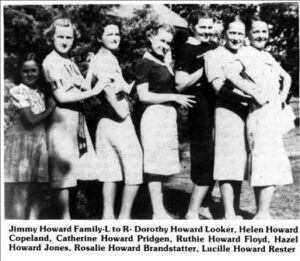 They and their children were all members of The First Methodist Church. Mr. Howard died in 1952 and Mrs. Howard in 1957. Both are buried in the Glenwood Cemetery in Crockett. Their daughter, Dorothy (Howard) Looker died in 1976 and is also buried inGlenwood Cemetery, Crockett, and their son; James William (Bill) Howard died in 1983 and is buried in Evergreen Cemetery,Percilla, Texas. Alice (Lively) Berry, grandmother of the Howard children, was raised in the old Lively home on College Street and used to tell about “the Augusta Balls” and of several wagon loads of young people from Grapeland going to Augusta and dancing most of the night and returning home in the “wee” hours of the morning. The W.W. Livelys belonged to the First Christian Church, Grapeland. The little “ole jail” used in the Centennial Celebration and now located in the corner of the city park was originally located in front of the Howard home along with a rustic building used as a courthouse. On a few occasions the “jail” was used overnight to lock up a rowdy fellow disturbing the peace and turned out the next morning when he sobered up! Mr. Howard acquired the “jail” building many years ago, but gave it to the city of Grapeland for its Centennial Celebration.