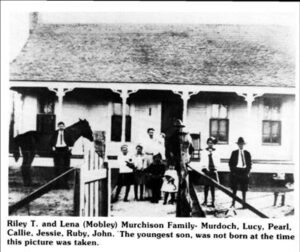 On November 6, 1863, Riley Teague Murchison was born to Daniel and Lucinda Teague Murchison on a farm about three miles northwest of Crockett, Texas, near Cook’s Mountain. Riley’s grandfather was Murdock Murchison who had been born in the Ross-Shire district of Scotland in 1792. His parents came to America when he was a small child and settled in North Carolina. On the same boat with the Murchison’s was a family named Macintosh. 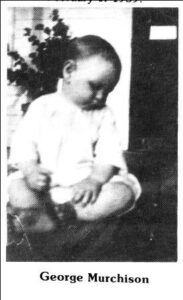 They had a baby girl named Lucy Macintosh. Murdock Murchison married Lucy and the young couple moved to Tennessee. Later they came to Texas and settled on Cook’s Mountain near Crockett. On December 28, 1892, Riley Teague Murchison and Lena Mobley of Daly were married. Lena was born January 5, 1876, to Andrew Jackson Mobley and Caldonia (Callie) Pennington. Callie was the granddaughter of Richard and Polly Walling Pennington. After Riley and Lena Mobley Murchison were married at her parents’ home, they moved to Latex° to live where Riley owned a home. He made his living in the sawmill business in Latexo. The couple lived there until 1912. They then moved to Grapeland where their children were all educated. Riley and Lena remained in Grapeland for the rest of their lives. Nine children were born to this union: Murdock, John, Lucy, Lois, Pearl, Callie, Jessie, Ruby and George. Murdock, the eldest son of Riley and Lena marred Mildred Slade in 1922. Murdock passed away on February 21, 1986. John married Sue Boggan in 1925. He died in February of 1939. Lucy married Ben E. Hail in 1925. They had one daughter, Emily Murchison. Lois married Lee Beavess in 1923 and they had three children: Leroy, Lucille and Stella. Pearl married Wade Gatewood in 1924 and they had two children: Wade, Jr., and Perlena. After Wade Sr.’s death, Pearl married Bob Chappell and they had one son, John Morris Chappell. Callie married J.O. Edington in 1931. After J.0.’s death in 1944, Callie married Jeff R. Jones in 1948. They did not have any children. Jessie married Jess E. Edwards In 1933. There were no children. Ruby married Lloyd L. Hill in 1936 and they had two children, Patricia and Lloyd, Jr. George married Ann Williams and three children were born to this union; Dan, James and Linda. Riley Teague Murchison and Lena Mobley Murchison had 12 grandchildren, 24 great-grandchildren and 10 great-great-grandchildren. Riley died October 21, 1945, and Lena died February 20, 1957. They are buried in the Grapeland City Cemetery. The Murchison descendants are very proud of their heritage. Even though they no longer live in the Grapeland area, each one still holds fond William Filmore Murchison was the son of William and Mary Wilson Murchison who moved to Texas in covered wagons before the Civil War, from Tennessee and settled five miles east of Grapeland on Murchison creek where she planted the first cedar tree in that area. There were thirteen children in his family, eleven sisters and one other brother, Christopher Columbus , who died of typhoid fever on the trip to Texas and was buried somewhere near Alto, Texas. William Murchison died in 1866 and was buried at Refuge Cemetery which was deeded to the County of Houston by Jim and John M. Brown who first married Izziebella Murchison, sister of William Filmore. Refuge Cemetery was given its name by Mary Wilson Murchison. William Filmore was twelve years old at the time of his father’s death and was left as man of the family to manage the slaves and farm. They owned and operated a cotton gin also. He was married at the age of 37 to Sallie Spencer Fans who was 18, on October 20, 1887 by the Rev. John Perry Faris, her father and a Presbyterian minister who owned and lived on a farm four miles east of Grapeland, now owned by Dr. E. G. Cutshaw. J. H. Richards was a witness at the wedding. They were parents of nine children: William Alton, Carnie Lue. Mary Mada, Johnnie Franklin, Herman Chilton, Eva Gene, Mayo Filmore, and George Spencer. Mary Mada Murchison and Olan Welborn Davis married January 1, 1914 and their children are Maola, Welborn Faris, and Sally Lou. Carnie Lou and John A. Frazier married April 16, 1925 and their children are William, Mary Jane and James Filmore. Eva Gene Murchison and Jot Davis Hollingsworth married December 23, 1927 and had one child, Beverly Jean. Herman Chilton and Maurine Anthony Pinkerton married June 2, 1938 and had one son, Frank Pinkerton. Mayo Filmore and Eva Mae Wolfe married memories in their hearts and minds for Grapeland and its citizens.