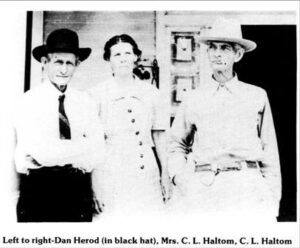 Charlie L. Haltom was born on April 5, 1879 along the Anderson-Houston County Line. He was the son of John D. and Martha Ross Haltom. Josie Herod Haltom was also born along the county line on January 13, 1883. She was the daughter of Reverend N.S. and Mary Murchison Herod. Charlie Haltom and Josie Herod both attended school (and later taught school) along the county line in theGuiceland Cemetery area. They were married on March 9, 1904 in the residence of the Reverend N.S. Herod. Dr. Fels Woodard officiated at the wedding while W.F. Murchison and N.S. Herod served as witnesses. After their marriage they continued to live in this area until about 1910. During this time they started their family. Their first daughter, Mildred Lee, was born February 7, 1905; a second daughter, Jessie Ozelle, was born on October 21, 1906; and a son, Charles Morris, was born on December 5, 1909. The family moved into Grapeland about 1910 and Mr. Haltom became an employee of Darsey’s store, He continued to work for this company until about 1920. During this time their family continued to grow with the birth of Helen Marie on December 21, 1911; John D. (Dubb) on August 14, 1914; George Harris on September 14, 1917 and Mary Eloise on November 25, 1919. The Haltom’s first residence in Grapeland was in the “Bridges House” immediately across the railroad from the present high school. They later built the home immediately north of the present Baptist parsonage. This home was later sold to Mr. M. D. Murchison. The Murchison family sold it to Bobby Hallmark. In about 1920, Mr. Haltom formed a partnership with Mr. Dave Leaverton and Mr. George Shaver and purchased a farm, later known as “The Holstein Farm”. 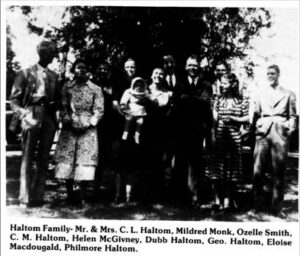 The Haltom family moved to The Holstein Farm (about 5 miles from town on the Augusta Road between San Pedro Creek and Murchison Creek). Mr. Haltom managed a short lived, ill-fated venture in the Holstein cow business at this location. The Haltom’s youngest child, Edward Philmore, was born September 28, 1921 on the Holstein Farm. The Haltom family left the farm and moved back to town in September, 1922 and Mr. Haltom was employed by the Carlton Bros. (Earl and Eugene) as salesman in their Ford automobile dealership. He sold many Model T Fords in the Grapeland area and taught many of his customers how to drive them. After working for the Carlton’s several years, he was employed by Mr. Herbert Leaverton (around 1927) in an automobile agency selling Whippet and Willis Knight automobiles. This association lasted several years into the “great depression”. He later engaged in agriculture and livestock operations in the Grapeland area. During these years Mrs. Haltom (with some help from some of her children) raised chickens and milked several cows twice daily. The milk, butter and eggs not used by the family were sold to other Grapeland residents. The family’s first residence after the move back to Grapeland was in the “Anthony House” just north of town along the west side of the railroad. In about 1924 they purchased the old Johnson home from Mr. Eugene Walling. They continued in this home together until Mr. Haltom’s death on June 27, 1949. Mrs. Haltom continued to live in the home until about 1965 when she sold it and moved to a retirement home. This home still stands on the north side of the Grapeland Community Park. The park land was a part of the Haltom homestead and Mrs. Haltom planted all of the pine trees which now stand in this park. All of the Haltom children were educated in the Grapeland Public Schools from which they all graduated. After graduation they continued as follows: Mildred Haltom married J. Grady Monk of Crockett, Texas. She attended Sam Houston State Teachers College from which she earned a bachelors degree and then did graduate work at the University of Chicago, Columbia University, and the University ofTexas. After teaching several years at Jones Schoolhouse and Latexo, she served as rural school supervisor in Houston County andSmith County. She was then employed by The Steck Company of Austin and was engaged in the writing and publication of public school textbooks for the next thirty years until her retirement in 1970. She still resides in Austin. Ozelle Haltom attended Sam Houston State Teacher’s College and taught in the Daly and Grapeland schools before marrying Jack I. Smith of Crockett. They resided in several East Texas cities before moving to Lubbock where they lived for 18 years. They had one daughter, Helen Grace. Ozelle moved to Austin shortly after Mr. Smith’s death on October 9, 1965 and still resides there. Charles Morris Haltom attendedSam Houston State Teachers College, United States Military Academy, and Texas University. He was a mathematician and spent his life as a teacher and doing research work for the Space Agency. He was a resident of Austin, Texas at the time of his death on June 29, 1984. Helen Marie Haltom attended John Sealy School of Nursing in Galveston and became a Registered Nurse. She married Dr. Merlin J. McGivney of Galveston and was a resident of that city until her death on April 23, 1985. John D. (Dubb) Haltom attendedAllen Academy and the United States Military Academy. He served in the army until he became disabled during World War II and was retired as a Lt. Colonel. He married Margaret Bland of Columbus, Georgia. They had a son, Stephen Lee and a daughter, Mildred Deborah. After his retirement from the army he became president of The Steck Company in Austin, Texas until his death on August 20, 1982. George Haltom attended Texas A&M College from which he graduated in 1939. He served as a navigator in the Army Air Force during World War II. He married Alice Devers of Palestine, Texas. They have resided in Houston since the end of World War II. Eloise Haltom married G. D. MacDougald of Hawkins, Texas. They lived in Grapeland a short time after their marriage. They then moved to Hawkins. They had two daughters, Mary Alice and Sarah Frances, and one son, Joe Paul. Eloise still resides in Hawkins. Edward Philmore Haltom graduated from The University of Texas. He served as a fighter pilot in the United States Navy during World War II. He married Lavenia Crittenden of Houston and they had one son, Edward Philmore, Jr. They resided in Victoria, Texas where they were living at the time of his death, June 8, 1982. Mrs. Haltom still resides in Waco.