John Jones moved from Cherokee County, near Rusk, Texas, to Waneta, Texas. We do not know his family history. He met and married Callie Hendricks, daughter of Mary and Snook Hendricks of Waneta, Texas. The Hendricks had six other children: Allie, Lewis, Edwin, Charlie, Suzy and Mertie. They were farmers, as was John. He and Callie had three children: Laudie, Maudie and Marshall McClue Jones. Laudie married Reginald Chambers. They moved to Groves, Texas, where he worked at a refinery in Port Arthur, Texas, for many years. They have six children: Don, Dale, Royce, Shirley, Patsy and Barbara. Maudie married Bert Lively. They lived at Waneta, Texas. They had two sons: J. B. and Billy Jack Lively. J. B. Married Velma Thomas from Elkhart, Texas. He was Sheriff and Judge of Houston County for many years and is a rancher at Waneta, Texas. They have one adopted son, Jimmy. Billy Jack married Joyce Bridges of Grapeland, Texas. He worked for Ideal Bakery for many years, now he works at Vulcraft. He also is a rancher. They have one son, Jackie Wayne. Marshall M. Jones married Rosa Ethel Dickey of Percilla, Texas, daughter of Laura Dunam and Babe Dickey. They farmed at Percilla, and then they moved to Grapeland, where he worked for N. V. Streetman Service Station and Dan Pennington Sawmill. 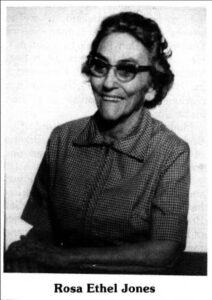 He also worked at the Houston Ship Yard during World War 11. He served in the Army in World War I. They had two children: Mildred Louise and Troy Fisher Jones. Mildred married Raymond Lee Bridges, son of Fred and Rosie Bridges of Grapeland, Texas. They had one son, David Lee. Raymond was a tail gunner in World War 11. His plane was shot down over Germany where he lost his life. Mildred later married Lewis Gail Bridges, son of Petter and Dora Bridges of Elkhart, Texas. Lewis is a farmer and rancher near Grapeland. They have two children: Vernita Pearl and Rickey Lewis. David Lee has one son and two daughters: Lewis Gail, Kathy and Patricia. He is married to Kathy Kitner Bridges. David Lee is a teacher and superior of The Hope Foundation near Grapeland. Kathy teaches 4th grade at Grapeland. Vernita Pearl has a son Sean and a daughter Shannon. She is a realtor in Houstonand is married to H. B. Hoyt. Rickey Lewis married Shirley Caskey of Grapeland, Texas. They have one son, Heath, and they live in Grapeland. Rickey works at Vulcraft and Shirley works at Davy Crockett Savings and Loan in Crockett. Troy Fisher Jones married Mollie Louise Dittman, daughter of Ruth and Tex who moved to Grapeland in 1939 with the “Oil Boom”. They have two daughters, Linda Faye and Martha Louise Jones. Troy worked in the oil field until World War 11, then he moved to Houston where he worked at the Houston Ship Yard, then worked to help build the Goodyear Rubber Plant, before he went into the Army. He served 3 months in Florida, then 2 months in California, and 13 months in the South Pacific. After the war, he returned to Grapeland to raise his family. He went to work at Haynes Garage, and then went to work for the City of Grapeland where he worked for 12 years. He bought a cement mixer in 1947; he contracted to pour the curbs and gutters for the streets of Grapeland. 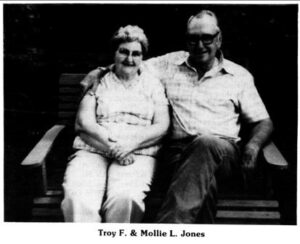 He started doing other cement jobs around town and in Crockett on the side. This started the Troy F. Jones Construction Company. This company grew into heavy equipment bulldozers, dump trucks, etc. He dropped the cement business, started digging stock tanks and building roads then oilfield locations. He operated this business until he retired on May 1, 1980. This business helped many families in the Grapeland area. Their daughter, Linda Faye, married James Stanley Skidmore, son of Russell R. and Marybell Lock Skidmore of Grapeland, Texas. They are both teachers; Linda Faye teachers kindergarten in Grapeland, J. Stanley was a math teacher in Grapeland, then high school principal for 12 years. 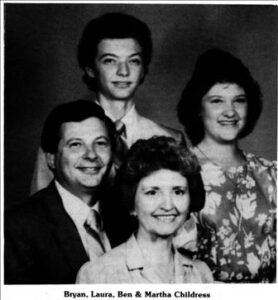 They lived in Pasadena, Texas, where he worked for Morse Wholesale then Retail Credit where he was promoted into Commercial Division of Atwell, Vogel & Sterling and were transferred to Alabama. He resigned that job, moved back to Grapeland, Texas, where he bought the Furniture Barn from his uncle. They own and operate, along with the Furniture Barn, Surplus & Salvage Sales Inc. (two stores), The Parts House, Mini-Storage and other rent property In the Grapeland area. They have two children: a son, Ben Bryan, and a daughter, Laura Lynn. Bryan works with his father and at the Furniture Barn. He is a senior in high school (1986-87); Laura Lynn helps her mother at home with the cleaning and cooking. She is a sophomore and is also head twirler for the Grapeland High School Band.