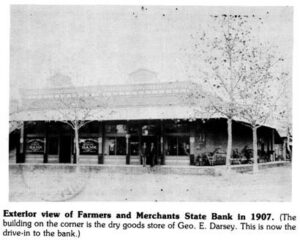 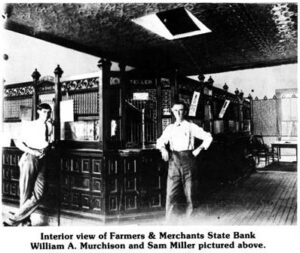 In the early 1900’s before Grapeland had a bank, some of the general merchants took care of the monies of their friends and customers. They carried a deposit ledger and allowed these people to put money in and draw it out at their will.

In 1907, on January 22, seeing the need for a bank, charter was applied in the name of The Farmers and Merchants State Bank, Grapeland, Texas. This charter was signed and sealed on January 31, 1907, by L.T. Dashiell, Secretary of State and the number given to the bank was 183.

The capital stock of the bank in 1907 consisted of $15,000, no surplus and no undivided profit accounts.

The building was expanded in 1986 to include a community and directors room, a kitchen, and storage areas. A parking lot was also built behind the bank.

The First State Bank has steadily grown through the years until the total assets now stand at $16,525,000 with a total capital of $1,600,000. The present board of directors is made of Walter Cook (chairman), George Bartee, Harvey Huff, J.A. Wilkins, Dan Walling, Charley Darsey, and Chester Cunningham. 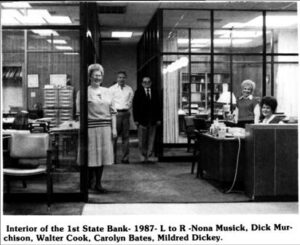