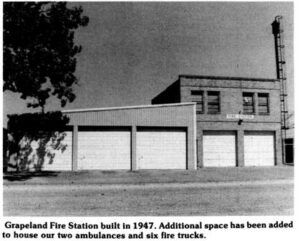 Fred Thomas, a charter member of the department, became the fire chief in June 1946. Except for a time in the early 1950s when Troy Jones was fire chief, Thomas served until his retirement in May 1969, making a total of 20 years. Arthur Walton, Jr. succeeded Thomas as chief in 1969 and served until 1978. Wendell Caskey became chief in 1978 and served until August 1985. Mike Bennett was elected chief in August 1985 and presently holds that position.

The city’s first fire station was built in December 1947 at a cost of $10,000. (Prior to that time the fire truck was housed in a garage belonging to Streetman Motor Co. where Bennett’s Garage is now located). In 1947 the city also bought the department’s first pumper truck, a 1947 Chevrolet. The new station had two bays and would accommodate both the new pumper and the old Fords hose carrying truck. The top story contained a meeting room for the department. The 1947 pumper is still in use as a backup pumper.

In 1971 emergency ambulance service also became a function of the Grapeland Fire Department. Funeral homes in the area who had been providing ambulance service quit doing so because of insurance and wage regulations. In order for the town to continue to have ambulance service, the fire department agreed to add that to their responsibility. A used Pontiac ambulance was donated to the department by Hassell & Foster Funeral Home and the Texas Department of Health conducted an Emergency Care Attendant School here to qualify department members for this work.

As the town’s needs grew and as better equipment became available the department had added equipment to better meet those needs. The department now has five fire trucks and two modular ambulances. Air packs have been added to enable firemen to safely function in the hazardous environment of today’s fires. A hydraulic rescue tool, usually called ‘Jaws of Life’, was added to aid in freeing accident victims. A radio dispatch system now saves valuable time in responding to fire and ambulance calls. Each vehicle is equipped with two-way radio and firefighters am ambulance attendants have pagers and portable two-way radios.

The department is organized into two divisions – firefighting and emergency medical services. Each of these divisions is headed by an assistant chief working under Chief Bennett. Lonnie Squyres is assistant chief, fire. Charley C. Darsey is assistant chief, emergency medical services. Roger Dickey, Dan Walling and Cliff Warner are currently serving as Fire Captains. Obie Allen and Glen McQueen are EMS Captains. Gregg Brown is secretary of the department. Andrew Moore serves as training officer. In addition to these two divisions the department has a reserve force consisting of former firefighters, experienced firefighters that are not able to attend the required number of drills and/or fires, and EMTs that do not wish to be firefighters. 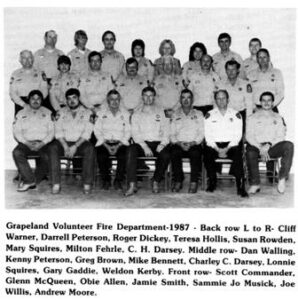 Members of the department have continually worked to improve their skills are qualifications through training and continuing education. Eleven of the members now Certified Fireman and more are being certified each year. Twenty members are Emergency Medical Technicians (17 EMT Basic, 2 EMT Special Skills, 1 EMT Paramedic) Many of the members serve in both divisions.

The community benefits from this training and equipment by savings in insurance premiums as well as the protection of life and property. The Grapeland Volunteer Fire Department is proud of the support it has always received from the Grapeland City Council and the citizens of the area. The members of the fire department have always felt that the communities around Grapeland were as much a part of their responsibility as the City of Grapeland because they feel that these communities are a part of Grapeland. Much of our equipment has been acquired with this purpose in mind. A lot of our support and donations have come from these communities.