C.W. (Charlie) and J.C. (Chester) Kennedy were partners in a general mercantile store known as “Kennedy Brothers” for some 80 years. The business began in Augusta and moved to Grapeland on January 1, 1909. The elder (Charlie) died August 26, 1952 and the other partner in 1958, after which the business was carried on by John Kennedy, their nephew, as manager but still under the original name. The Grocery and Hardware section of the store was closed in 1958, but “Kennedy Brothers” continued as a dry goods and ready-to-wear store until January 1, 1979.

In partnership with John were Charlie’s three children: C.W. Jr. of Crockett, Ruth of Grapeland and Dr. John C. of Houston. (Chester had no children and his wife, Clara Rice preceded him in death in 1953).

The original brothers were sons of John and Josephine Kennedy of Augusta. Josephine was the daughter of Eliza McLean Wall whose father, Daniel McLean, came to Houston County, Texas from Tennessee in 1813 as a member of the Guitierrez-Magee Expedition.

The business in Grapeland was housed in a large two-story brick structure built about 1907 of hand-made sand brick (made locally). The building still stands on Main Street.

They, indeed, could be called builders, for they were instrumental in helping to organize the Grapeland State Bank, of which Charlie was president for many years. (His son, C.W. Jr. served as President from 1958-1975). Both were active in the local Chamber of Commerce and the Lions Club. Chester served as the city’s mayor from 1930 until 1944. Some accomplishments during his tenure of office include Grapeland’s first ordinance for Public Water Works in April 1930; a franchise to lay gas lines was granted in July 1930; in June 1939, the city had its first paved streets, and the first streetlights were put up in 1944.

Charlie served for many years as president of the Grapeland School Board of Trustees (and as such signed the high school diploma of each of his children). He was also an active member of the Board of Stewards of the local Methodist Church. He was a Past Master of Grapeland Masonic Lodge as well as of the Augusta Lodge and was a 32nd Degree Mason. Chester was a Past Member of Augusta Lodge, also.

They continued their interest in farming and were land holders in Houston and Leon Counties. Charlie was a “cotton buyer”. The store served customers from the Neches River to the Trinity River.

When these brothers built their homes in 1916, they chose the lots two blocks north of the store on Main Street. Even today that block is called the “Kennedy Block”. 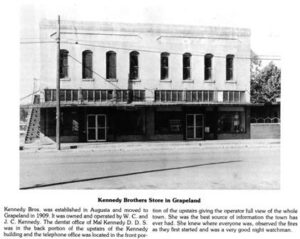 Kennedy Bros. was established in Augusta and moved to Grapeland in 1909/ It was owned and operated by W.C. and J.C. Kennedy. The dentist office of Mal Kennedy D.D.S. was in the back portion of the upstairs of the Kennedy building and the telephone office was located in the front portion of the upstairs giving the operator full view of the whole town. She was the best source of information the town has ever had. She knew where everyone was, observed the fires as they first started and was a very good night watchman.