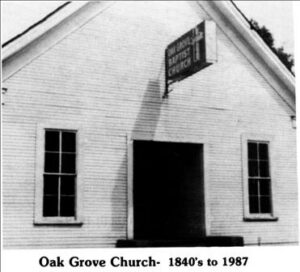 In the last years of the brief life of the Republic of Texas or in the early days of the state of Texas some men and women were led by God to build a church in the vicinity of that area that is now Oak Grove. ‘I will build my Church’, and here in Grapeland we have seen the Lord Jesus do that. These settlers were more interested in worship of the Living God than in recording their history. From this through several locations and even the changing of the name has come the present Oak Grove Baptist Church. From scraps of paper, old gin weight books, backs of letters, microfilm at Southwestern Baptist Theological Seminary Association’s minutes and personal memories have come this history.

Early records mentioned that the church was constituted in the 1840s. Beginning in 1848 sometimes the church would almost die and then be resurrected to a greater life. Attending the meeting of the Texas Baptist Association of September 20, 1868 at Pleasant Grove Baptist Church, delegates of the Friendship Church (later to be known as Oak Grove) were S.F. Wall, W.M. Burnett, and Perry Halloman. The mailing address of the church at this time was Crockett, Texas and the location was in Anderson County. Pastor S.F. Wall was pastor and the clerk was J. Morrison. That year the church had one new member by baptism, eight by letter making the total membership thirteen.

In 1868 the association met on the Saturday before the fourth Sabbath at Ioni Church where the churches were placed in districts. Friendship Church (Oak Grove) was put into the second district with Liberty, Elkhart, Alabama and Macedonia churches. A footnote at the bottom of the association’s minutes stated ‘The meeting of all the churches commences on Saturday before the Sabbath stated.’

Perry Halloman was pastor when the association met at Crockett in 1869 and also when it met at Calvary in Trinity in 1871. The delegates to the association in 1872 were M.L. Wortham, N.S. Herod, and Pastor S.F. Wall. Pastor Wall was paid $20 for the year by the church’s eighteen members. The church at the time was called Friendship Church at Grapevine.

The association records show that the church membership had grown to fifty-seven members by 1875. The delegates listed during the 1870’s were N.H. Handcock, Mat Miller, Thomas Kincade, E.K. Lively, G.W. Boatman, Jasper Hardin, and R.S. Owens. The Neches River Association met on Saturday October 23, 1875 at 11 o’clock at Friendship Church. For the first time there was a Sunday school and an educational report of eight students give. They recommended that a school of higher learning be established in Pennington.

In 1879 G.H. Stovall, pastor of Friendship Church recommended that ‘Only members who have evidence of salvation be accepted, that none be accepted without immersion, and that the rolls be purged of heretics’.

In 1880- the association recognized three missionaries. One of the missionaries was Pastor Wall. He promoted Sabbath school and educated when there were few. Pastor Wall was very faithful through this time.

According to local records, in 1881 Friendship’s name was changed to Grapevine Baptist Church. The church was called Grapevine until 1890 when it was then changed to Oak Grove Baptist Church at Grapeland, Texas. According to the Neches River Seminary records of 1881 the church name was Grapeland with an address of Grapeland, Texas. It remained Grapeland in the seminary records until 1885 when it was again listed as Friendship. In 1886, the records do not show a Friendship or Grapeland. But the church at Refuge lists the delegates as N.S. Herod, K.K. Lively and S.H. Stovall (delegate and pastor). 1887 records list N.S. Herod as delegate and W.M. Hill as pastor at Refuge. The name Oak Grove first appears in association records in 1888 listing J.E. Bean as clerk, J.F. Johnson as pastor and W.M. Kolb as delegate. In 1891 the Oak Grove Church showed a membership of twenty-three, a pastor’s salary of twenty-five dollars per year, and total gifts of twenty-five dollars and seventy cents. The property was valued at three hundred dollars. In 1893, J.E. Bean was ordained as a minister. Oak Grove gave eighty-five cents to missions in December, 1895. The pastor was J.E. Bean, and the delegate was Willie Kolb. The membership totaled fifty. The Oak Grove School had three levels of learning, one teacher and twenty-seven students.

In 1898 Oak Grove and three other churches left the association because of the ‘Hayden Controversy’ but returned in 1902.

The educational building was built in 1917 and in 1925 Pat Taylor and Graton Streetman were ordained as deacons. Eighty-one dollars and fifty cents were donated to retire the indebtedness of Southern Baptist Convention.

In 1926 Oak Grove seated five delegates to the Sunday school convention at Waco.

In 1934 a committee was formed to clear the church title and deed of the church property. A piano was purchased and paid for on a monthly basis.

The church was doing so well in 1948 that they paid the light bill in advance for the year in the amount of eighteen dollars. In 1950 the church voted to begin half-time services attending only the second and fourth Sundays due to the loss of members. 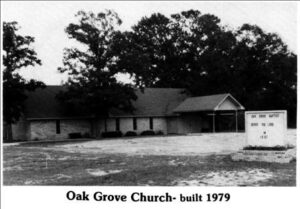 Pastor F. Jack Edwards served the church from 1973 until 1982. Pastor Edwards helped build a new sanctuary and began the educational building. Sam Hill Newman had sent the church seventeen dollars and fifty cents to start a building fund in 1975 and this challenged the church to give until over forty thousand three hundred and fifty dollars had been collected.

Men cleared the trees. The slab costing four thousand dollars was poured. Over thirty-four hundred hours of labor was volunteered by the men and women into the building of this church. Friends, former members and foundations sent money to help on the project and the building fund now was eighty thousand dollars.

A revival was held on the bare slab and Sunday school classes were held there. Then when the walls were up, classes used it without a roof. As soon as the pulpit platform was built, a men’s class used it. The baptistry was filled with a water hose, and a tarp provided walls for the candidate to be baptised in.

In 1979 Easter Sunday services were held in the new auditorium and by November a new piano was given, and a new organ purchased.

The dedication services for the new building were held on February 24, 1980.

In 1986 Oak Grove now has a full-time pastor and nine deacons with seven young preachers licensed to try for the ministry. Church membership enrolled in Sunday school totals 202.