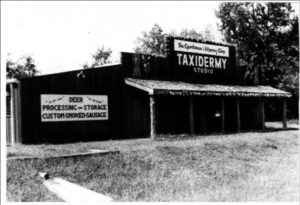 The Sportsman’s Memory Shop began doing business in 1980 and only eight years later has become one of the best known taxidermy shops in Texas. The owners, Bobby Shaw and Robin ‘Trap’ Coppedge have become two of the highest award winning taxidermists ever in Texas with over 30 awards in state, national, and world taxidermy competitions. All these awards were won in 1983-1985. The Sportsman’s Memory Shop retired from competition at the end of 1985 because they had so much business that going to competitions just seemed to take away from productive work time. Some notable awards include 1st place Bass in Texas, 1983; 2nd place Bass in the World, 1983; 1st place Bass, Deer, Duck & Small Mammal in Texas, 1984; 1985 Best of Show in Texas; 1985 Best of Category (1st Place) Bass in Texas; 1985 Best of Category (1st Place) pair of Ducks in Texas. After only two in business the Sportsman’s memory Shop expanded to include deer processing and storage into their operation, and now employ four additional people to help with this operation during the annual white tail deer hunting season. In 1984 the Sportsman’s Memory Shop began buying furs on the retail level during the annual fur beaver trapping season and have continued with this endeavor ever since. These two additional services, deer processing and fur buying have allowed the Sportsman’s Memory Shop to become a place where locals and out of town hunters can trade without long trips to different parts of the state.

Success for the Sportsman’s Memory Shop has not come easy, because taxidermy today is such a competitive and fast growing industry. Many innovations have occurred in recent years and months. To stay on top of these changes these taxidermists have read every major taxidermy publication available and have ‘hustled’ to stay on top of changes.

Because of their quickly growing reputation the Sportsman’s memory Shop has become a trainer of taxidermists wishing to set up their own shops in other parts of Texas.

Many people wonder how a taxidermy studio way out in the country could stay in business especially during the recent years of economic depression. The simple fact of the matter is that local business could not support this full time studio. Rather the opposite has occurred over the years as most of the studio’s business comes from Houston and Dallas and from hunters there who are willing to drive three hours and past many other studios to get the type of work they desire and deserve.

The Sportsman’s Memory Shop’s clientele are certainly not restricted to Texas either as they have done work for hunters from as far away as Switzerland, Alaska, Pennsylvania, Utah, Kentucky, Tennessee, Florida and many other states across the nation. They have also done work for several museums and are making plans to do more museum work. A particularly notable piece in a Pagosa Springs Museum is the New Mexico State Record Black Bear which the Sportsman’s Memory Shop remounted after being almost ruined by an earlier attempt by another taxidermist.

After five years in business and never having mounted a mountain lion, the Sportsman’s Memory Shop felt like they were never going to see a mountain lion. Today they work closely with one of the finest mountain lion guides in the world and now mount many lions each year. he Sportsman’s Memory Shop has mounted animals from all over the world including Africa, Alaska, Canada, Spain, Hawaii, Cuba, Mexico, South America and many states in the Continental U.S.

The Sportsman’s Memory Shop sponsors a yearly ‘Big Buck Contest’ and the winner is mounted at no charge for the lucky hunter. The 1986-87 winner was the second largest buck ever taken in Texas with a bow and arrow. Several of the other winners have been from Houston County even though deer from all over the state, even from the famous south Texas brush country were entered.

Also, the Sportsman’s memory Shop has mounted five of the last six Houston County Lake record bass including the existing record of 14lbs 6.5ozs which was caught by Don Bush of Channelview.

To help promote their business over the years the Sportsman’s Memory Shop have had numerous articles in newspapers across Texas. Stories in magazines such as North American Whitetail, Texas Sportsman magazine and the Sporting World Magazine. They have also done numerous radio ads and even T.V. Commercials in their local area. The Sportsman’s Memory Shop also has done numerous talks to civic organizations and hosted several field trips for grade schools, scout troops and even retirement homes at their shop. They have found over the years that only one type of advertisement really pays and that is the word of mouth advertisement from satisfied customers. They owe a great deal to these people for their continued support of their taxidermy work.

Many of our friends and clients have said over the years that the Sportsman’s Memory Shop has helped put Grapeland on the map and if we really have them, we are very proud to have been a part of this.