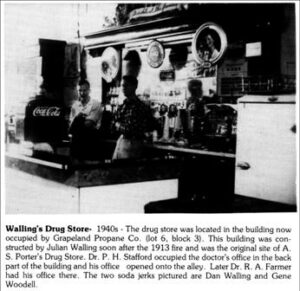 Among the business that were destroyed by the fire in March 1913, was the drug store of Mr. A.S. Porter. In the following years, Eugene and Julian Walling constructed several buildings in the burned out block, one of which was leased to Mr. Porter. In this new building, Mr. Porter had installed modern (for that time) drug store fixtures, including a marble soda fountain with a large mirrored back bar and four “tuck-away” seat soda fountain tables.

Later, Mr. Porter sold his drug store to Wade L. Smith who operated it as “Peoples Drug Store”. Mr. Smith employed high school boys as “soda skeets” and one of them was Otto Walling, who became interested in pharmacy. After graduating from Grapeland High School, Otto attended the University of Texas School of Pharmacy in Galveston, and was licensed to practice Pharmacy in 1923, at which time he returned to Grapeland to work for Mr. Smith. In 927, Otto bought the business from Mr. Smith and renamed the business Walling Drug Store. 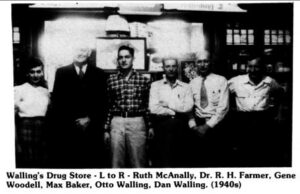 Soon after becoming the owner of his own business, Otto married his sweetheart, Sarah Thomas (Tommie) Holcomb, who was a teacher in the Grapeland schools. With the business doing well, Otto and Tommie started a family, son Daniel David, born October 29, 1928 and William Eugene, born November 19, 1920. However, the depression which started in 1929, struck Grapeland as hard as any other area and for the next several years, Walling Drug Store struggled to make ends meet. With hard work and long hours, Otto hung onto the store and when oil was discovered near Grapeland in the late 1930s, business got better. On February 20, 1939, the third son, Thomas Otto, was born to Otto and Tommie. 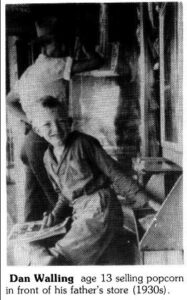 In 1941, Dan began working as a “soda skeet” and he also became interested in Pharmacy as a profession. He attended the University of Texas College of Pharmacy in Austin and received his degree and license in 1951.

He then spent the next four years in the United States Air Force.

In 1953, Otto bought out Ryan Drug Store from Mr. J.H. Ryan and since Dr. Sam Kennedy’s offices were in the back of that building, Otto moved his business to that building.

In 1955, Dan finished his enlistment in the Air Force and returned home with his bride, Elaine, who is the daughter of the late Paul Everette and Eddie May Tate of Greenville, Alabama. Dan then worked for Otto and did “relief work” in the area stores for the next several years.

In 1963, Otto purchased the building at 106 Main Street, which had formerly housed the City Cafe and Luce’s Shoe Repair Shop and in 1965, his brother Curtis Walling constructed the building in which the business is now located. The store then became a partnership business and when Otto died in October 1973, Dan became sole owner of the drug store and changed the name to “Walling’s Pharmacy” in 1974. In June, 1986, Dan had extensive remodeling done in the store to make it as modern as any pharmacy in the state of Texas.

During their years as owners of Walling Drug Store, Otto and Tommie were very active in the community. Otto served on the school board and during World War 2, on the Rationing Board, was a charter member of the Grapeland Lion’s Club, a member of the Masonic Lodge, Grapeland State Bank Board of Directors, Tommie was active in P.T.A., Community Council and did much work to help the Grapeland Memorial Hospital built.

Elaine served two terms as president of Grapeland PTA, held officers in Band Booster Club, is on the third three year term on Community Council, was secretary of Grapeland memorial Hospital Board of Directors for three years, has directed the Peanut Festival Queen’s Coronation for 14 years, was president of Grapeland hospital Auxiliary for one year, taught kindergarten Sunday school class for over 20 years, and is a member of UMC choir.

Dan and Elaine have two daughters: Laura, who is Director of Intramural Sports at Mississippi State University; Teresa Walling Bennett, who is a pharmacist’s assistant at Walling’s Pharmacy. 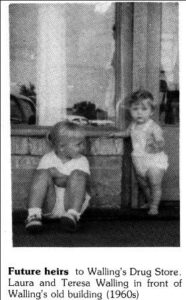 For the last 63 years, there has been a Walling filling prescriptions in Grapeland. 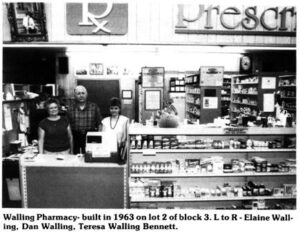